Some years ago, a group of music educators who were great fans of John Curwen’s sol-fa method, developed in Victorian times, founded the Curwen Institute and one of them, William Swinburne, wrote a book, through which they hoped to renew the use of sol-fa in UK schools by teaching the method in parallel with notation.This was the “New Curwen Method”, published by Stainer and Bell. Sadly, it looks as though the venture wasn’t well supported and the Institute seems to have disappeared (as its founders have aged or died?). I believe that the book is now out of print but there are copies available from Amazon. It was based on the idea of teaching with a giant stave on a whiteboard against which the teacher would form the sol-fa hand signs. Doh (Do in Kodaly system) would be marked with a square at the beginning of the stave. Kodaly’s system was also a development of John Curwen’s ideas. In the Kodaly method, pupils initially learn to read from rhythmic stick notation with the first letter of the sol-fa syllable under it. It is possible to combine the two by writing sol-fa letters on a stave, with stems and dots to indicate rhythm.  “The Kodaly Method” by Lois Choksy, published by Prentice Hall. has  an appendix of songs in progressive order, in addition to examples of stick notation and hand signs.
In my  free software Learn Tonic Sol-fa With GridPlay, described on this blog, I try, in some grids, to parallel the New Curwen Method by writing the sol-fa syllables on a modulator which is as close as I can get to a musical stave. The pitches of these syllables can be ‘played’ with the mouse, so the user can check  pitch accuracy when singing from the syllables. 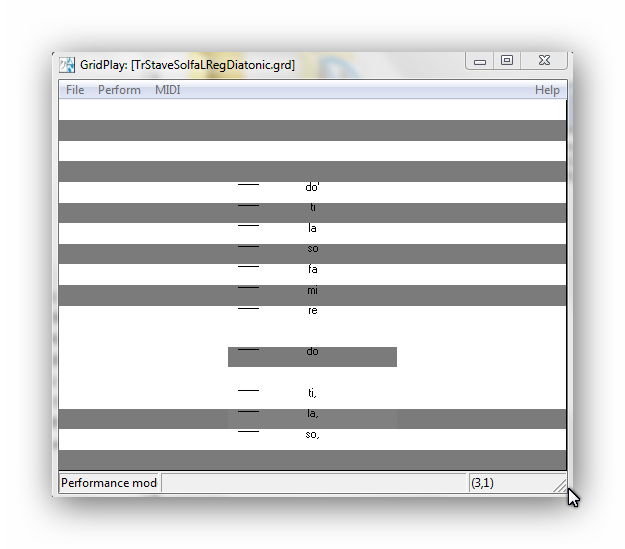 This example is in C Major but the layout of the grid could be used as a template for other keys.
The software also includes fully chromatic C-based ‘notation’ grids in different registers.
Several posts on my blog deal with aspects of tonic sol-fa, so if you don’t see what you want in this post, check the ‘Category’ menu in the sidebar for more on this subject.